Illegal pyramid schemes take many forms.  A month ago I warned you about the Secret Sister Gift Exchange. I first reported to you about this scam in 2015. It seems harmless enough when you see it come up in your email or on social media, such as Facebook and Twitter where it has increasingly been found lately.  It is often titled the “Secret Sister Gift Exchange” which generally starts when you are  provided  a list of six people.  You are told to send a gift worth at least ten dollars to the first person on the list, remove that person’s name from the list, move the second person on the list to the first position, add your name to the end of the list and then send the list to six of your friends.  In theory, you will receive thirty-six gifts for your small contribution of ten dollars.

So where is the harm?

First of all, it is a blatantly illegal chain letter and violates Title 18 of the United States Code, Section 1302.  In addition, like all chain letters, ultimately, it is destined to fail because it is a pyramid scheme where eventually we run out of people on the planet. For the last few years a Holiday Wine Exchange pyramid scheme has been turning up on Facebook, Instagram and other social media.  This pyramid scheme operates just like the Secret Sister Gift Exchange except you are directed to send bottles of wine.  There are many scammers using this scam and some of them are interested in gathering personal information from you that they use to make you a victim of identity theft.

Here is a copy of one of the posts used in this scam. 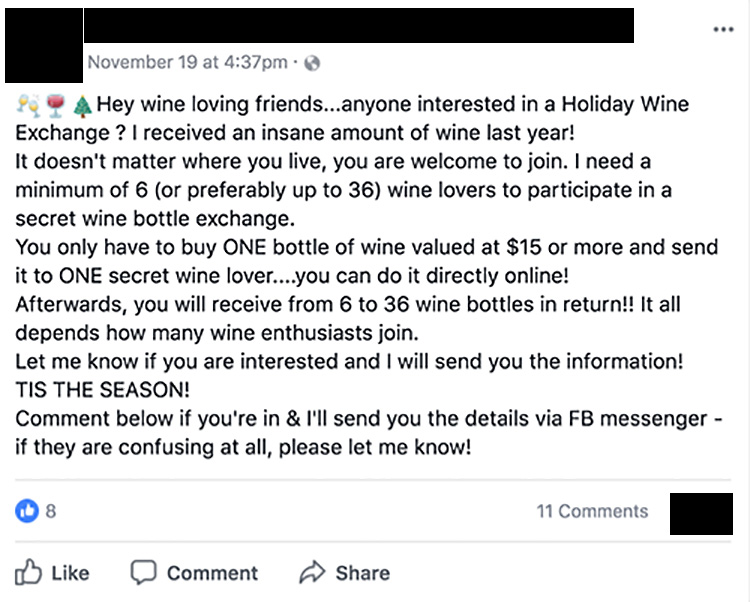 Avoid all chain letters regardless of the guise under which you receive them.  They are illegal.  In addition, although in some instances this particular chain letter is turning up on Facebook, it is a violation of your Facebook terms of agreement, so you potentially face the loss of your Facebook account if you participate in the scheme.

People falling for this scam are unlikely to receive any wine, but definitely will be whining when the information they provide to the scammer leads to their identity being stolen.

If you are not a subscriber to Scamicide.com and would like to receive daily emails with the Scam of the day, all you need to do is to go to the bottom of the initial page of http://www.scamicide.com and type in your email address on the tab that states “Sign up for this blog.”