Many people may not remember the name of Mavis L. Wanczyk, but she was the lucky winner of a 758 million dollar Powerball drawing in 2017. Not long after she claimed her prize, a scam started appearing in which many people received an email with the message line referring to the Mavis L. Wanczyk Cash Grant. The email indicated that you were chosen to receive a large cash grant from Mavis L. Wanczyk. All the lucky strangers receiving the emails had to do was provide personal information in order to qualify for the grant. In addition, phony social media accounts on Twitter, Facebook and Instagram were also set up in Ms. Wanczyk’s name through which people were contacted with the same phony offer of free money informing them that in order to qualify for the grant they merely needed to provide personal information.

Now the scam appears to be resurfacing in large numbers as evidenced by the many emails I am receiving from Scamicide readers complaining of this scam.   The scam has now migrated from emails to Twitter as shown by the tween reproduced below.  Of course, the new tweet and all of the previous emails and social media messages  purportedly from Mavis Wanczyk are scams. No one is offering you money for nothing (nor for you Dire Straits fans, “chicks for free”). Providing personal information such as your Social Security number or bank account information in order to direct the wiring of funds merely results in your becoming a victim of identity theft and/or your bank account being looted.

Here is a copy of the tweet presently being circulated. 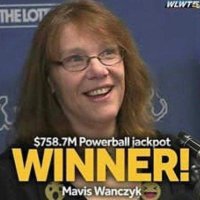 Follow
wanczyk_L_Mavis
@_wanczyk_mavis
I’m Mrs. Mavis Wanczyk, the winner of $758 Million in Mega Millions Jackpot, I’m donating $10k to $50k to everyone in need, Dm me if you want to get win
Phoenix, AZyoutube.com/watch?v=7kWnqv…Joined January 2018
954 Following
78 Followers
Not followed by anyone you’re following”

It is difficult to win a lottery you have entered. It is impossible to win one that you have never entered and neither lottery winners, nor anyone else is sending out messages through the Internet offering free money to anyone who responds with personal information. Never give out personal information that can make you vulnerable to identity theft unless you have absolutely verified that the party requesting the personal information is legitimate and has a legitimate need for the information.  Also never pay anything to a lottery claiming you owe fees in order to claim your prize.  This is a telltale sign of a scam.